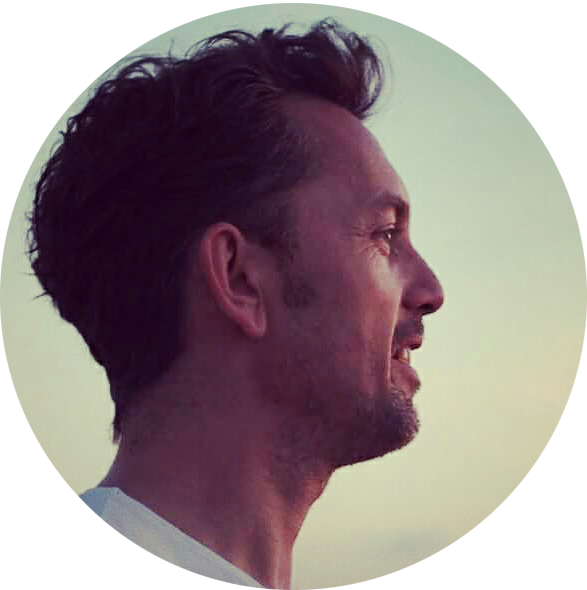 About the writer – Paul’s an English guy working as a journalist in Paris and runs the award winning radio show called bienurban and is part of the global network SpottedbyLocals. 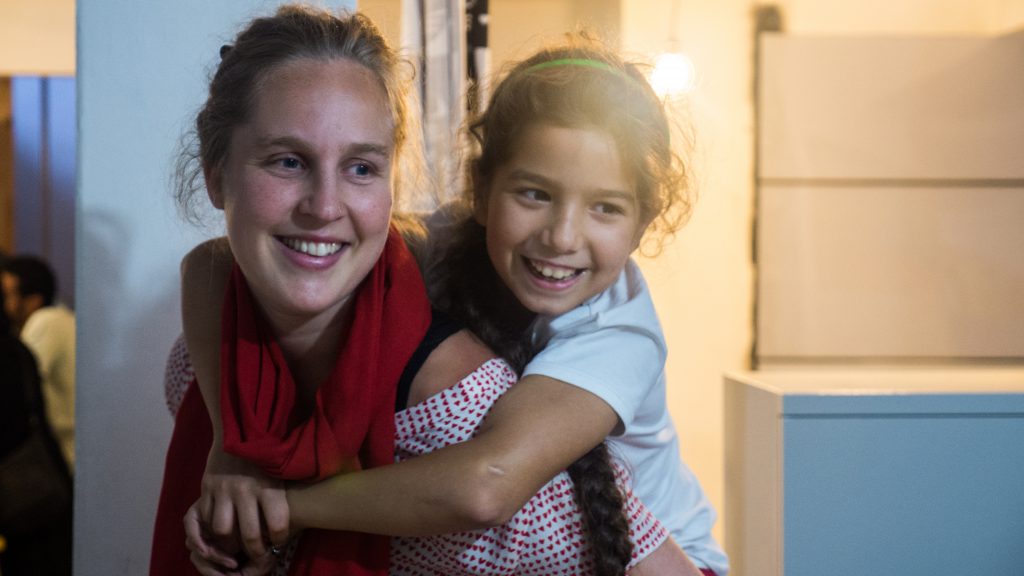 The Oliver Tree community center is a home-away-from-home for Shannon Kay and the extended family she has found in the local Syrian community, here with Gulbahar who attends a regular homework group there.

Shannon Kay picks up my call over What’sApp and is unfazed by my thinking-out-loud opening gambit, “so how are you coming across, with the level of your voice?” I ask. Shannon responds – encouragingly – “erm, I can hear myself fine, so you’ll have to tell me… how much louder [do] you need me to talk?”

A believer in the notion that process is sometimes as important as the outcome, for Shannon “it leads to strong personal connections and trusting relationships between people,” a point from which emerges through humanity’s better traits, those of empathy and patience.

In many ways a worldview evolving out of experiencing the time her parents connected with in community in Nepal; complimented by the college professors who inspired her interest to study transformative education systems:

“My goal was always to get involved with an organization or group that lent towards enabling development through providing opportunities where people [particularly refugees] can have resources to access the kind of education, that then inspires people to move forward in their own personal development and the environments that they have around them.“ 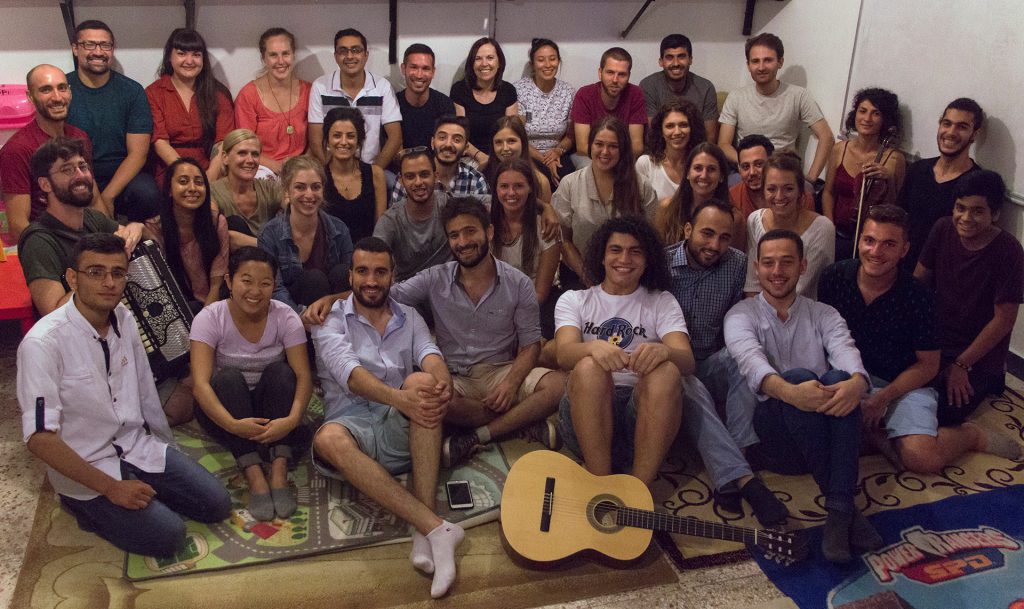 The ‘family’ of volunteers and center users at Small Projects Istanbul in the Oliver Tree Community Center. Shannon Kay the project’s manager, who is profiled is situated fourth from the right, back row.

For over 14 months Shannon has been co-directing Small Projects Istanbul which is situated in the Turkish capital’s Oliver Tree Community Center. Before that, as a 6 month placement volunteer there, interrupted only by a semester spent 14,000kms away in her native Melbourne for completing her studies.

When she returned Istanbul in the summer of 2015, also came an unexpected turn, she says frankly, “the first 8 months were hard, I was using more energy than I was bringing”; Shannon quickly hit a burnout wall, and even today admits “I haven’t yet managed to find the right balance for myself… I haven’t quite hit the ideal spot yet.”

I rephrase my earlier question: Do you have a spiritual hideaway where you can occasionally cocoon yourself?

“I’ve got better… yeah… I really miss team sport, but it’s actually difficult to find consistent team sport that girls can get involved in [in Istanbul]. So I occasionally go running. Then I’d play football with the people from the center, which isn’t totally removing myself.“

It’s only now that Shannon is settled into the interview and reveals a more personal side. In the ‘occasional time’ away from the center she reads and enthuses “I… just finished a novel by Khaled Husseini, the guy who wrote A Thousand Splendored Suns.”

She talks about reading as a tool for exploring. “I read from different perspectives about displacement and war”, calling it a mediative activity, which helps her make sharp enquiry. “To read about it from a different perspective sometimes can help me internalize and reflect on the stories and the situations that I’m being exposed to here.”

“There’s a lot of depressing stuff out going on at an individual story scale [for people] and if you don’t frame that in the bigger picture of the world that’s transforming, in a way that is more and more towards a sustainable humanity and a positive… a positive… a positive place to live, then you can start to get a bit disillusioned that no matter how much you try, it’s never going to make a difference.“ 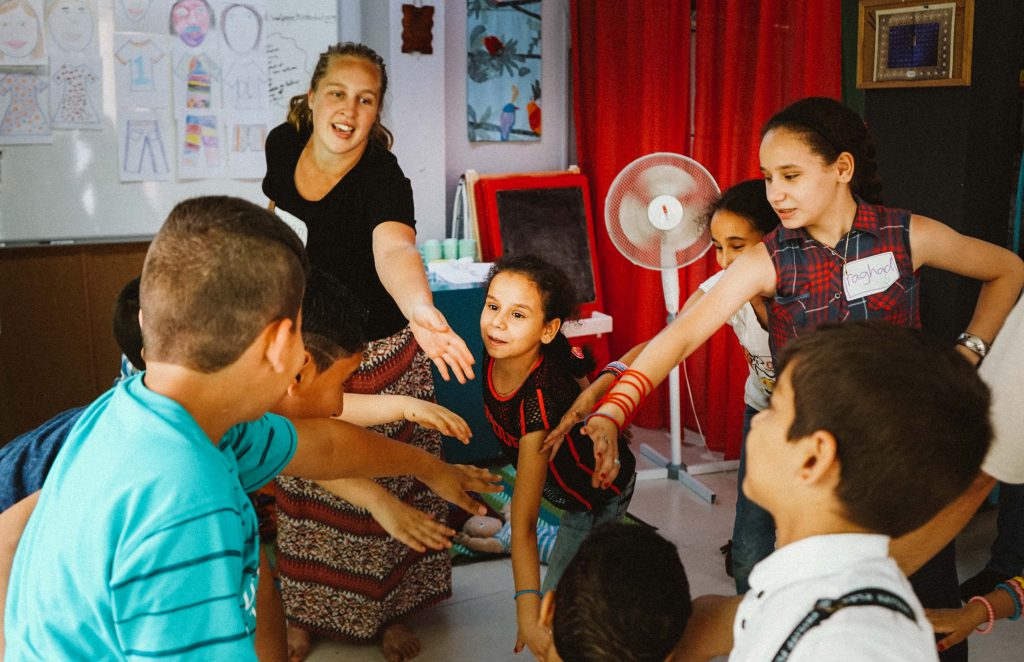 Children interacting and learning during a homework class, one of the several activities Small Projects Istanbul offers to children and adults in the Oliver Tree Community Center, here with Shannon Kay the project’s hands-on manager.

About the work, “I find it hugely rewarding” she encapsulates with enthusiasm. “We did a survey recently, with all our volunteers, and the most reoccurring theme that came up was people’s sense that the physicality of the space, and the relationships that they’ve developed within the space… it feels like home… it feels like family.”

Postscript: I contacted Shannon by email asking for a portrait photo of her, just, doing a typical activity. She sent a picture featuring a school-age young girl wrapped around her shoulders (see feature image); both smiling to camera, to which I was spellbound. And accordingly replied to Shannon asking for a bit of background on the shot, also for a caption. Here’s her magical response, in original lower case writing:

“yes it’s a new photo, the context was that I walked back into the center after speaking with you yesterday and said to simon “hey can you take a photo of me” then when the camera came out, gulbahar, who was doing her homework with a tutor jumped on me and I swung her around feeling a bit silly while simon snapped a few ‘candid’ shots! so kind of a spontaneous/staged moment, representative of the familiar environment of the center (but which isn’t normally caught on camera!)

caption could be: The Oliver Tree community center is a home away from home for Shannon and the extended family she has found in the local Syrian community

(that’s probably too long.. you can say whatever you want! but genuinely there are a lot of people here, like gulbahar who are pretty much like family to me now and the close relationships I have built with them is the most rewarding and sustaining part of my experience in this place).“